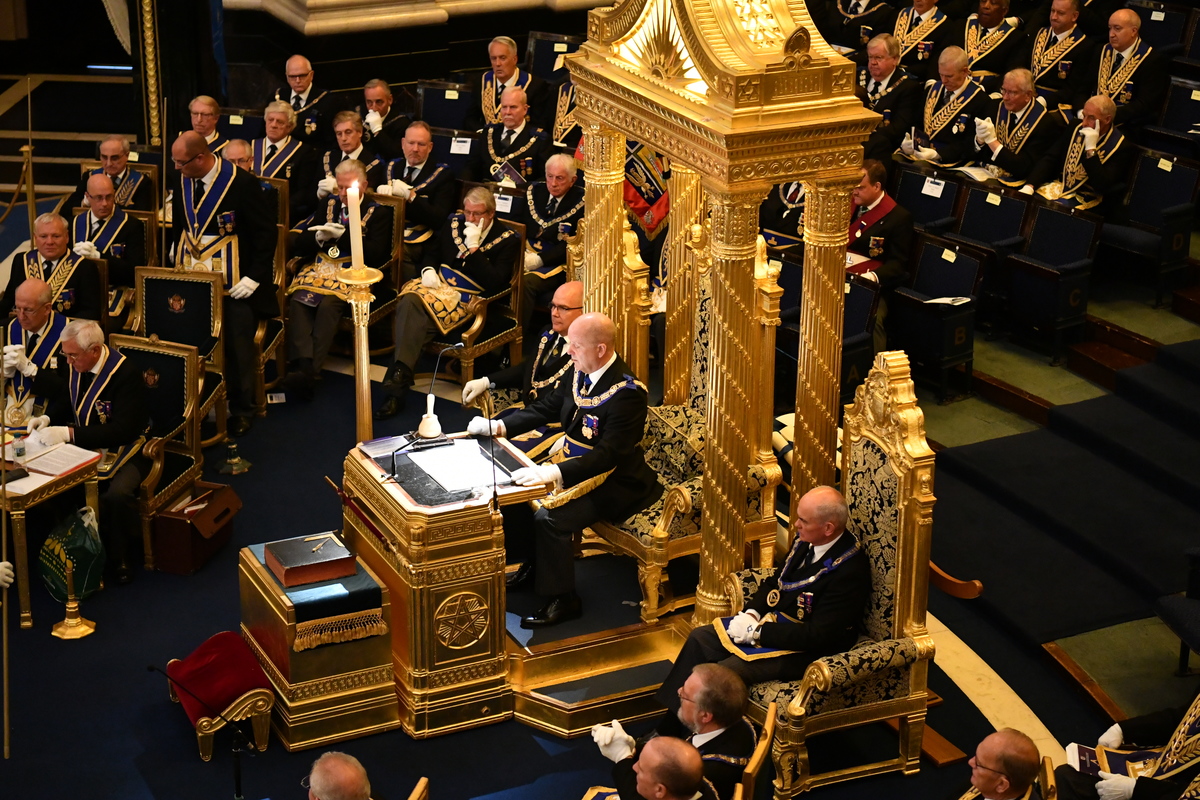 Our Provincial Grand Superintendent for the Royal Arch, John Keeble, has announced that he will be stepping down on the 29th February next year. John has been a guiding light for freemasonry in this Province and has taken the Royal Arch from a steady decline upon his arrival in 2015 to a substantial increase in membership in the last year. The Royal Arch in Buckinghamshire is now near the top of the membership performance league of provinces in Supreme Grand Chapter; although John’s legacy is much more than this. He has forged a seamless link, between the Craft and Royal Arch, which is already paying dividends in both. I am delighted to say that John has agreed to continue to serve on the Craft Executive.

I would like to thank a number of key people, Stephen Knapp who is stepping down as Provincial Treasurer for his outstanding contribution over the last five years and to welcome Dan Cole as his successor. Dan has worked as Treasurer for the Buckinghamshire Masonic Benevolent Fund for many years and has already moved the Provincial accounts online.

Eugene Matthias has been promoted to Provincial Junior Grand Warden and is replaced by John King as Provincial Mentor. John, who with an exceptional team including David Winterburn, has transformed the North East Corner Club into a great success. I also congratulate Grae Laws, who will now take over the helm.

You will have recently received the latest issue of Concord, in its new style. This is being edited by Matt Perkins with production managed by Scott Buckle. I extend my thanks to them for producing an outstanding publication. Congratulations to Lloyd Harrison who will now head up the Ritual Team, under our Provincial DC, taking over from Matt Perkins who got the project off the ground last year with great success.

Full details of these changes and all responsibilities of the Executive team are published on HeliPAD, our new online directory and information system, which we have recently launched. This system is unique in Freemasonry, allowing each of you, to check and update your contact details directly. In the first month of launch we have received more than 500 updates to personal details which demonstrates just how much we needed this system.

Additionally, by measuring the number of bounced emails, we get through our mailing system Constant Contact, we have already increased our effective distribution by 100 members. This has demonstrated that the only way to manage an accurate membership database is to get each member to control their own data. HeliPAD provides a wealth of other information about our Lodges and members and I know is already the go to place for anyone wanting information. I would like to take this opportunity of thanking our DPGM, Hugh Douglas-Smith who has led the development of HeliPAD. For those of you that don’t know HeliPAD is an anagram of Adelphi.

What a fantastic year we have had around the Province with our Festival fortnight raising an additional £70,000 for the festival. I would like to sincerely thank everyone who took part, but in particular the “famously unfit” in my Executive for paddling Canoes, jumping off buildings, mountains and out of aeroplanes and so many other things from our members. This all culminated at Bill Smithson’s prestigious Gala Ball at Milton Keynes which was attended by over 450 people. To do all this on top of everything you are already doing for the Festival was an outstanding Buckinghamshire achievement. Mike Clanfield, our Provincial Charity Steward will now use this opportunity to take our efforts up a gear to deliver the best result we possibly can for the Masonic Charitable Foundation who support us in our province very well indeed. I thank the Chief Operating Officer, Les Hutchinson, for attending today and for his unstinting support. I would like to take this opportunity to thank those lodges that have already reached Patron or Grand Patron for the festival for their outstanding achievement. I would encourage all lodges to do their very best for both the Province and the MCF.

This year we consecrated a new lodge. The Nomadic Lodge aimed at Caravan and Motorhome enthusiasts, already nicknamed the “Shed Draggers”. The Lodge was consecrated, fittingly, in a tent, in a field, at Winslow. This was a superb day organised by Caleb Walton, Mike Clanfield and Tony Robinson and many others from an initial idea whispered to me at a meeting in Marlow a year or so before by Norman Fox. Although a little chilly at 8am we had a lovely day with a wonderful festive board attended by partners. The following day at 5am Gary Brodie and I set off to paddle 26 miles down the Thames from Oxfordshire to Berkshire which raised over £7000 for the 2021 Festival.

In support of our smaller lodges we have many exciting new developments.

Lodge of Concord will become an aviation lodge with some very interesting ideas being developed and with the River Thames running right through our province, we are also looking at repurposing a lodge to be a mariner’s lodge in the next year.

Our marketing campaigns, although not at the level I would like, are now paying great dividends with new membership enquiries increasing each week. We have funds to support our marketing and will make best use of these going forward. In order that we can sustain this I have asked David Briant to put on a Provincial social function each year with the aim of raising £7000 or more annually to spend on marketing. David’s events are well known and always oversubscribed, and I urge you to book in quickly to avoid disappointment. The first one will be held in Haddenham on the 29th February 2019 and details will be circulated in the next few weeks.

Web enquiry candidates are now often given to smaller lodges. We then intensively support these lodges with increased attendance from Provincial Exec and visiting groups such as the Wanderers, NECC and Stewards.  We do this for at least 12 months following a new candidate being introduced. Phil Blacklaw and I are visiting these lodges at as many of their meetings as possible to offer our support. This together with superb aftercare service from John King and his mentoring team will continue to increase our membership in a sustainable manner for the future. These visits have resulted in some great meetings and increased dining.

I would urge you all to make sure you appoint a Secretary and Master who can be the lodges Chairman and Managing Director to drive the lodge forward and plan for a growing future. I would urge everyone not to be complacent and to help to drive your lodge forward with interesting meetings and a superb festive board. Don’t let the summons arriving surprise you about the date of the next meeting.

Many of us, when asked about our organisation struggle to find a way to describe what is so good about it. The friendship, camaraderie, pomp and ceremony and belonging to a club are all things that we mention when asked. However, in this day and age of Pubs and meeting places dying off and people spending more and more time sitting alone in front of screens, with younger people conducting their social life on Facebook and Twitter we may be missing a most important opportunity. In Freemasonry we develop long lasting relationships and friendships cemented together by principals that continue into our old age. As our Pro Grand Master has said in the past Freemasonry provides Continuity and Reliability, something no longer common in this day and age. Our children, who typically spend many years in school and 3 years of their life in University rarely end up with many long-lasting friends. Freemasonry is unparalleled in this aspect and we must always remember to tell everybody about the vast number of kind, gentle, good hearted friends that we all take for granted. My own lodge Five Points which has been struggling for years now has more candidates than they can cope with and only one of these came from the marketing campaign. Three initiates and 2 joining members were announced at the last meeting and they are not alone. This new initiative is producing some superb results.

“Brethren, there is still a need to encourage more members.  We are active out there in our communities. We use almost every possible medium to present Freemasonry to the community to attract new members but perhaps we also need each and every member to actively ‘spread the word’.  When your Lodge is engaged on a community event, whether a donation, a staged event or practical support, do you ask the ones you are helping to tell others how the Freemasons have supported them? Do you ask them to tell their families, friends or work colleagues how Freemasonry has supported them?  Do you ask them if they would like to join to help others?   Do you make it very clear that they can do this? For the forthcoming year, please talk to your community and “spread the word” as your own personal contribution to Freemasonry in the Community!”

I ask you all to try to introduce one candidate into Buckinghamshire Freemasonry in the next year.

Ladies Gentlemen and Brethren I once again thank you for taking the time to come here today and hope that you will enjoy the dinner that follows.