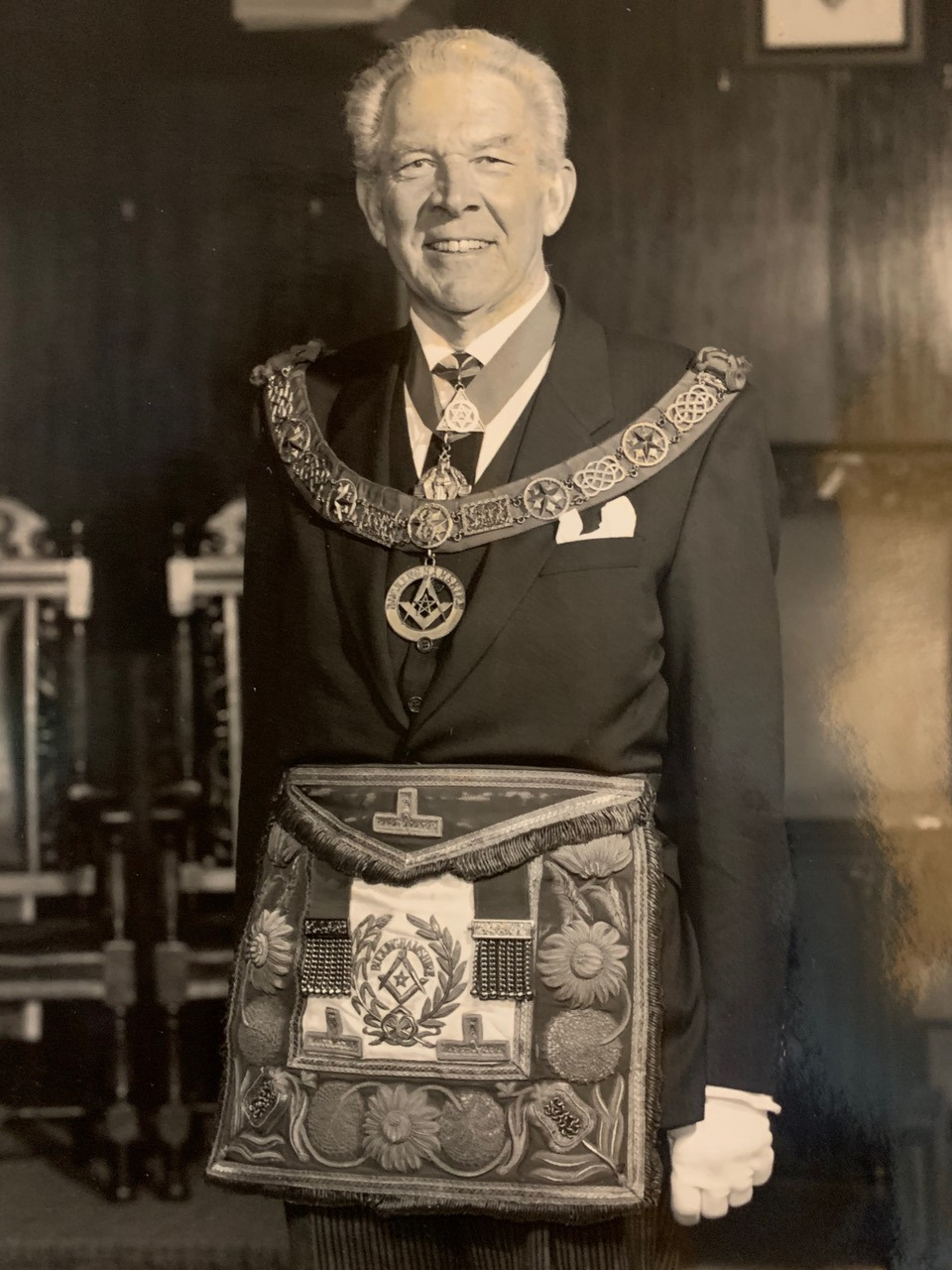 Eric has served the Province in an outstanding manor. I was a only just over 4 years in Freemasonry when Eric became PGM and I remember the great esteem in which he was held by all and I thought it would be a nice tribute to such an outstanding man to hear from our other past PGM’s and Grand Superintendents about their thoughts of Eric;

RW. Eric Deung was an inspiration to all as our Provincial Grand Master and Grand Superintendent, I was privileged to know him well and I am very saddened by his death.

I initially met Eric when I was WM of the Bourne End Lodge in the mid 80s, a tall imposing man, friendly, supportive, a great communicator and motivational speaker, he impressed all.

One of his greatest successes was as the first chairman of the BMCF.  He asked Ian Chalk and me, a committee member, to visit one of the applicants.  We found this young charity was virtually broke, but what we saw was impressive and we recommended the PACE Centre as worthy of our support.  Eric and the committee agreed and look at what happened to PACE moving from virtual extinction at the time to the amazing organization of today.  The Province has continued to support PACE for close on 25 years, we can be proud of that support which Eric identified and authorised.

He was a brilliant mentor to all who knew him, always willing to provide valuable advice.  His natural ability, along with Don Varney and Roy Fender, whom he also developed, was his extraordinary ability to identify and develop young men to achieve amazing success.

We extend our sympathy to Jackie, his rock, and the rest of his family.

“May I first say how sad I am to hear of the death of RW. Eric Deung who was an inspiration to me and others in my early years as a Freemason in Buckinghamshire during the 1980s and 1990s. He will be sadly missed and remembered with high regard by many members who were around during that period.
One of my earliest memories of Bro. Eric was as Deputy ProvGM when he visited Heatherden Lodge in the middle of the 1980s and, as a reasonably new member at that time, I was struck by his friendly manner and obvious love for the office he held and the duties he was performing. At that first meeting, I remember him as a tall imposing figure, a good speaker and a person the members were extremely honoured to receive. He was a Freemason who inspired confidence in others and one who encouraged an ambition in all to progress and achieve whatever they could throughout their masonic journey. It was no surprise to me that he went on to become Provincial Grand Master in 1993 and served with distinction until succeeded by The Rt. Hon. Lord Burnham towards the end of the decade. Bro. Eric held many other high offices during his active years in Bucks, not just in the Craft but also in the Royal Arch and other orders as well, and I am certain that those orders will also hold fond memories of his time with them. His name will live on through the Eric Deung Lodge No. 9695 consecrated in his name in 1999 and he will live on in my personal memory as the PGM who put me forward as Provincial Grand Steward before he stepped down. I was fortunate enough to meet him for what has now become the last time a few years ago at Eric Deung Lodge and I remember it as an extremely enjoyable occasion and how well he coped with his increasing lack of eyesight.
For those of us who were around at the time, he will be remembered with affection, and I’m sure all of us wish to extend our sincere condolences to his family, friends and lodge members.”

My memories of RW. E.Comp Eric Deung begin in 1991 when I was privileged to have him, as Most Excellent Grand Superintendent, present my Grand Chapter Certificate. Prior to then he was just a name in the hierarchy of Buckinghamshire Freemasonry. His presence and personality shone out, his explanation of the Certificate and his obvious passion for the Royal Arch, made a lasting impression on me and had a significant impact on my subsequent love of the order.

I first met RW Eric Deung as a young entered apprentice in 1996; he was visiting my mother Lodge Vale at the Aylesbury Centre. I remember being told that someone very important was coming along, and to be on my best behaviour. During the meeting, he must have noticed my EA's apron, straight after the meeting, he came to find me. He then spent a healthy amount of time asking me how I was doing, what questions did I have about Masonry. He showed a genuine interest in me, someone who had only been in Masonry a few months. RW Eric was more interested in who you were rather than what you were. It is something I have never forgotten and tried to emulate over the years.

As I progressed in Masonry, when faced with any problems, I have always asked myself what would my predecessors have done in this situation. As I now look forward to taking over as the Most Excellent Grand Superintendent, I will continue to use Eric as an excellent role model. With his passing, Buckinghamshire Royal Arch has lost a guiding light; however, the legacy Eric has left behind for us all to follow, is one which will ensure Masonry in Buckinghamshire will continue to grow from strength to strength.

As you can see Eric was held in great esteem by everyone that has been fortunate enough to spend time with him. He passed away on Sunday 14th June 2020 at Great Oaks, a private care home in Bournemouth. His wife of 40 years, Jackie, said was a delightful place to be. He moved there on the 21st February 2020. Even though a long way away our Provincial Almoner kept a watchful eye over him and his wife in his declining years which were marred by blindness and a dislocated and fractured shoulder which gave him a lot of pain.

Eric will be missed by all but I am sure that thinking of him will always put a smile on our faces.