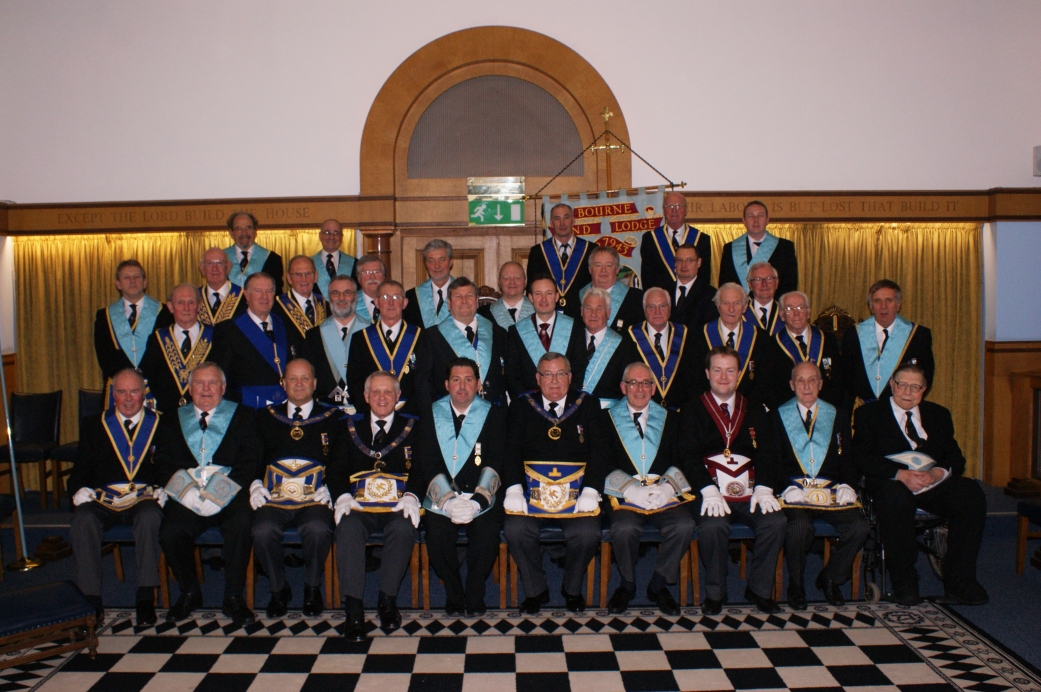 The Lodge regularly meets during the Winter at the Masonic Hall, St Peters Street, Marlow Buckinghamshire on the second Saturday of the month.

W.Bro. Bertram F. Jones P.G.D.,P.P.G.W. Deputy Prov. Grand Master in charge was the consecrating officer. Planning for the creation of the new Lodge began a year earlier on 27th May, 1963 when thirteen of the founders met that evening in the Marlow Masonic Hall and W.Bro. V.P. Holiday proposed that W.Bro. F.G. Wigmore be elected Chairman of the founders planning committee until a WM Designate be elected.  At the same meeting it was proposed by W.Bro. F.J. Turk and Seconded by Bro. W.A.Halstead that the new Lodge be called ‘Bourne End Lodge’ The reason for the choice of name is not recorded, but 7 of the 19 Founders resided in Bourne End at that time.

Also at this first planning meeting it was agreed that Emulation working would be adopted for the Lodge and that meetings would be held on the second Saturdays in February, March, October, November and December. The next founders planning meeting was held on 27th June 1963, when it was proposed and agreed that Marlow Lodge be asked if they would sponsor Bourne End Lodge. At the following planning meeting on 23rd July 1963, Bro. H.A. Maddock submitted a design for a crest for the Lodge.  Its approval was proposed by W.Bro. F.J. Turk, Seconded by Bro. C.W. Reeve and unanimously approved.  The design and explanation of the crest was the result of Bro. Maddock’s work in conjunction with the late Bro. E.H. Weaver of Borlase Lodge.

Regular founders meetings then continued throughout 1963 and into 1964 and the planning of the final details of the consecration ceremony itself.  The cost per member for Collars and Jewels was Three Pounds Five Shillings and for a Founders Jewel Seven Pounds Fifteen Shillings.

It is interesting to reflect on the association of the new Bourne End Lodge with Marlow and the choice of name.  Until the 18th century the area which is now Bourne End was comprised of a number of hamlets on the river Wye, which flowing from High Wycombe joined the river Thames at a point half a mile towards Cookham from the present centre of Bourne End. In the eighteenth century the entire length of the river Wye was the provider of power for numerous mills in the valley.  In 1846 the Wycombe Railway company was formed and in 1854 High Wycombe was linked to Isambard Kingdom Brunel’s main line at Maidenhead with a bridge across the river at Bourne end.  A station was built at the Buckinghamshire side of the river Thames and was originally named “Marlow Road”.  In 1874 a branch off this line was opened into Marlow itself, and the original station on becoming a junction was renamed “Bourne End”.  The advent of the railway changed the whole development of the area. The focal point of the village moved to the vicinity of the station, with links to Marlow, Wooburn Green and High Wycombe expanded.

In 1964 when Bourne End Lodge was formed, the railway line to High Wycombe and Wooburn Green still existed with road level crossings adjacent to the station and another on the Cores End Road.  The founder’s interest in the history of Bourne End is reflected in the design of its emblem and Banner, references to its symbolism being included in the preamble to the Lodge’s By-Laws.  Included in the Crest is a water wheel, a fitting symbol for the Lodge, and the mills that were the beginning of development in the area.  The inclusion of the Swan denotes Buckinghamshire and thereby distinguishes us from Bourne End, Hertfordshire.  The ear of corn near to a fall of water is the usual depiction of plenty in our lodges, while the scroll may be taken to represent the Charter.

The first two Initiations into the Lodge took place at the 26th October 1964 meeting.

He was proposed by his father W.Bro.V.P.Holiday, a founder member, and seconded by Bro.A.J.Billinghurst, also a founder and a member of a family of builders whose business was centred in Bourne End at that time.  Roy later became Treasurer of the lodge for a period of twenty six years.

The lodge Banner was dedicated at the meeting of Saturday October 8th 1966.

This was also an Installation meeting at which W.Bro. A.J. Billinghurst was the Installing Master and Bro. C.W. Reeve the Master Elect.  The dedication of the Banner was performed by the Rev. T.D. Prentice, P.G.Chap., Prov.G. Chap and presented by W.Bro. Bertram F. Jones P.G.D., P.P.G.W., Dep. Prov. GM., who had donated the Banner for the Lodge.  The Festive Board was held at the George and Dragon Hotel Marlow. By that year the membership of the Lodge had increased to 32, including Bros. J.J. Mitchell and G.F. Pinder, both of whom in 2014 are still current members of the lodge.  In November 1964 they were balloted for together in open lodge, and became joining members on 12th December 1964 and 13th February 1965 respectively.

From the late 1960s onwards the membership of the Lodge increased steadily and has maintained an average of 40 members over its 50 years existence.  Current subscribing members Bro.A.J. Hurst and W.J. Tilbury were Initiated in December 1970 and November 1972 respectively

Since its inception the Lodge has prided itself on the standard of its ritual and ceremonies.

The Bourne End Lodge’s club of instruction meets every Tuesday.  The regularity of the rehearsals, together with a succession of dedicated Preceptors, has enabled the Lodge to maintain a high standard of performance and sustain the enthusiasm of its members. In 1975, eleven years after its formation, Bourne End Lodge sponsored the consecration of the Thames Mariner Lodge No. 8628.  It was fitting, as the majority of its Founder Members were members of the Bourne End Marina Cruising Club, based in Bourne End.  The club supported and promoted many events and competitions on the river, which at that time was a popular water front attracting many visitors.

Bourne End Chapter No 7943 was consecrated on 26th November 1985 with 13 Founder members, 8 of whom were from Bourne End Lodge.  It meets at the Marlow centre on the second Tuesday in January, the fourth Tuesdays in April and November. The Bourne End Lodge has, since its inception, been a strong supporter of the organisational and charitable work of the Province of Buckinghamshire.  The contribution and dedication of its members to the Bucks Province has been recognised on many occasions notably being the appointment of R.W. Bro. Ray Reed as Grand Master of the Province, a position he held with distinction for eight years. Additional contributions for other roles of Provincial Secretary by W.Bro. Derek Watts  and Provincial Treasurer by W.Bro. Stephen Knapp.

The Lodge has also been honoured at the highest level and five members have been appointed and served as Grand Officers :

The well-established Annual Ladies Festival is one of the popular social events of the year, and enables Brethren and their wives to gather with families and friends to support the Master and his Lady on what is always a happy and successful evening.  During the summer months events such as garden parties, and boat trips are always popular and provide contacts and encouragement for new membership.

In recent years the Christmas White Table meeting in December has become a very popular event where member’s families and friends can enjoy the festive season together.  The highlight of the evening is the visit of the Hambleden Church choir, and the members and friends participation in the singing.

Bourne End Lodge has, and continues to be, a strong and active contributor to the charitable work of the Buckinghamshire Province. Through the years since its formation in 1964 the Bourne End Lodge can justly be proud of its contribution to Freemasonry.  It continues to attract new Initiates and encourage them to actively support the order and participate at all levels in the numerous events and charities engaged in by the Lodge in a typical Masonic year.  In recognition of its charitable work the Lodge has achieved Patronage of a number of specific funds as proudly listed on its summons. A member a Hertfordshire lodge (now a member of  Bourne End Lodge), started the MTSFC (Masonic Fishing Charity) in 1998.  In 2004, Bourne End members formed the Bucks chapter of the MTSFC along with members of Stokenchurch Lodge, continue to run it today. Additionally member of Bourne End continue their active support of Bucks Masonic Development fund and sponsorship of the ‘Rock Ride‘ Gibraltar to Bucks cycle ride.

May the record of our last fifty years be an inspiration to all current and future members, and may those principles and tenets which are the foundation of Freemasonry be continued from generation to generation.