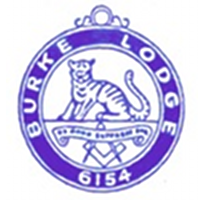 Burke Lodge is a very friendly lodge which meets in Marlow Masonic Centre with 6 regular meetings a year (Installation in October followed by November, December, February March and April, our meetings are held on the second Thursday of the month , we have a busy social calendar and also try and support other Lodges as well.

The Lodge received its warrant on 1st August, 1945 and was consecrated on the 3rd of October that same year at Burnham Hall, Malthouse Square Beaconsfield. Bro. H.L. Brown the founding Junior Warden of the Lodge, lived at Burke Lodge House, London End Beaconsfield. The lodge originally met at the Gerrard’s Cross Masonic centre but following a petition of the membership decided to relocate to The Marlow Masonic Centre in 1982.

The emblem on the banner is based on the Arms of Edmund Burke, depicting a wild cat, sejant and gardant above the Square and Compasses, with the motto “Do good and supress evil”, to which the Lodge aspires. At the very top of the banner are the Sun, stars, moon and a quite unique interpretation of the all-seeing eye. The banner also features the two pillars at the porchway or entrance, a chequered floor and some of the movable and immovable jewels. The silk banner has been hand painted, and despite the care taken by brethren, its antiquity is evident in the signs of wear and tear that is evident. Nonetheless, it is a beautifully painted masonic banner that features an interesting white and blue tassel edge.

As a further piece of information, in 1992, RW Lord William Burnham the then PGM attended their installation meeting and during the festive board he informed the then WM. that he had Edmund Burkes sword at his home in Hall Barn Beaconsfield.