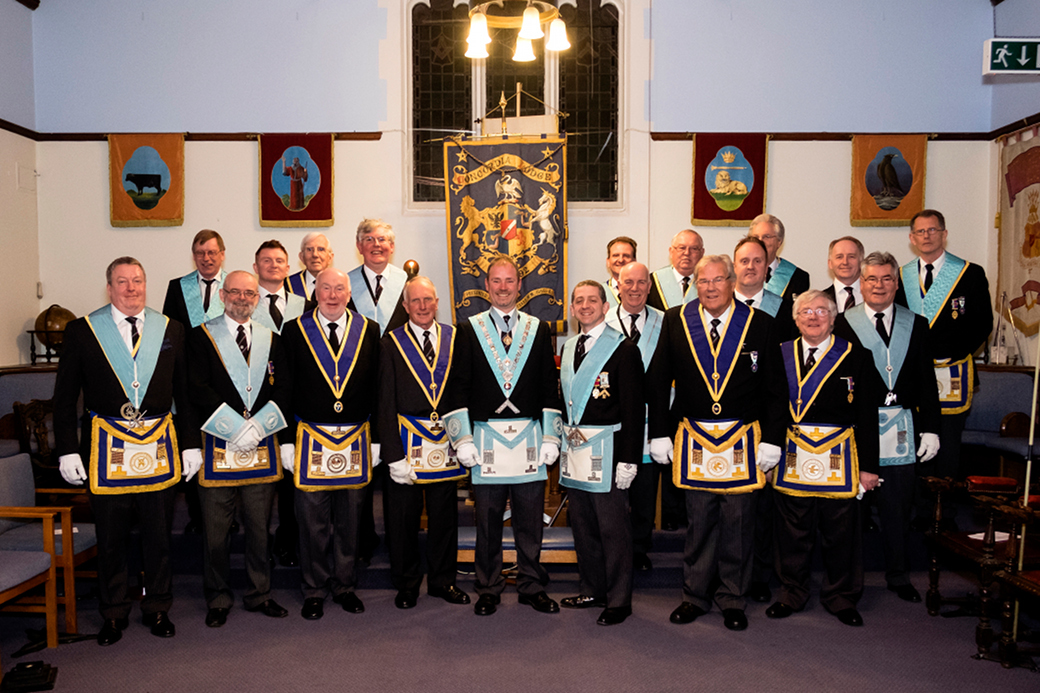 The Banner rededication of Concordia Lodge No. 2492

The brethren of Concordia Lodge, No. 2492, were joined on Tuesday 8th March 2016 by 26 members of the Provincial team (including the PGM and two APGM’s) during the rededication of the Lodge Banner.

Buckinghamshire PGM, RW. Gordon Robertson, occupied the Chair for the ceremony and gave a most interesting précis of the 122 year history of Concordia Lodge; part of which is reproduced below. He congratulated the Lodge on its long association with the Province and gave thanks for what has been achieved in the past as well as to celebrate the future potential of Concordia Lodge within our Province and of course, Freemasonry in general.

Concordia Lodge was consecrated at the Red Lion Hotel, Wendover, on 29th January 1894 by the DPGM, VW. Bro. the Rev. Brownrigg.  They continued to meet at the Red Lion until 1923, when the lodge moved to Aylesbury. Initially, at the Bulls Head, and finally, moving to Ripon Street in 1946.  Concordia may have had a tenuous link with the Rothschild family, as the banner features one of the family symbols, the five arrows, and the word Concordia is also featured in the Rothschild family motto; although, as we know, it is also a popular masonic word relating to harmony.

Concordia members were very influential in the early days of Buckinghamshire Freemasonry. The first Provincial Handbook was compiled and edited by W.Bro. Henry Jowett, Secretary of Concordia and also a member of Buckingham Lodge. In 1901, W.Bro the Rev. Roberts, of Concordia, was appointed as Provincial Grand Secretary and he had a considerable influence on the Province. He revived the Provincial Directory and calendar, editing it himself until 1917. He revised the Provincial bylaws in 1905, which included for the first time, a scale of fines upon lodges and members: One guinea for not being represented at PGL, or for a late annual return and on Provincial Officers, half a guinea for being absent without a good excuse.

Bro.Roberts is also credited with the first suggestion of a Master and Past Masters Lodge in Buckinghamshire, when he made mention of it in 1906 at the Provincial Meeting. He went on to become the founding SW of Bucks Masters   Lodge No. 3305 in 1908. Concordia lodge continued its success and went on to become a Hall Stone Lodge, receive a Centenary Warrant and achieve high status in a number of masonic charitable organisations for its excellent charitable contributions.

The Banner rededication then followed with the RW PGM concluding with the following words: “It is a fact that the vast majority of Freemasons admire their Banners for their beautiful design and ornate craftsmanship. But one should never forget that a Lodge Banner should remind us of our duty and fidelity to our faith and is considered the rallying point for the three Great Principles of Freemasonry, Brotherly Love, Relief and Truth.

Today we commemorate the banner, along with the achievements of this Lodge, but even at this time of great celebration we must not forget to honour the Lodge founders.

As we share this joyous event may we communicate happiness to each other, not only on this special day, but until time with us shall be no more.”

The Lodge then gave their most sincere thanks to Brothers Larry Maskell, Brian Stabler and Brian Bruton who were the driving forces behind the organisation and payment of the work that needed to be done to restore the banner, over 100 years in age, to its former glory. 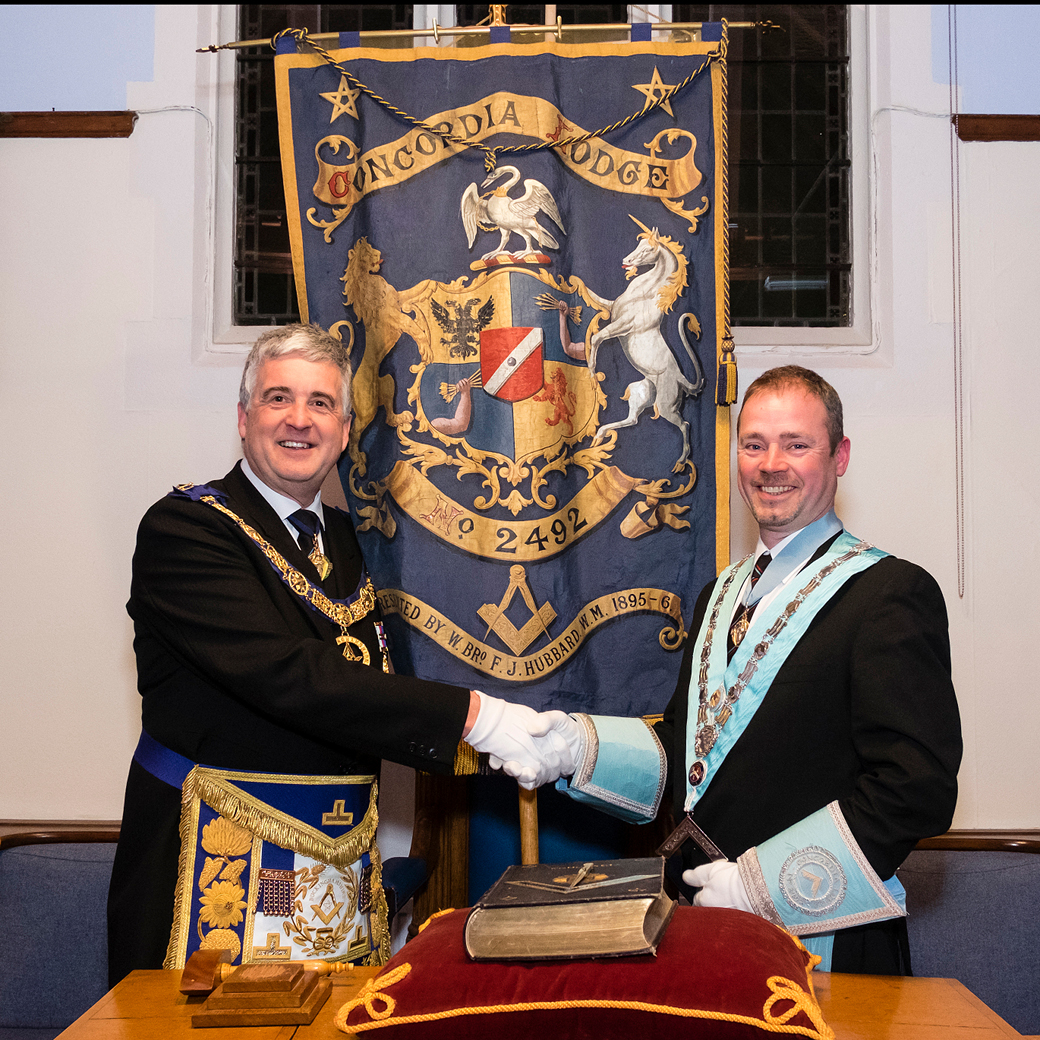 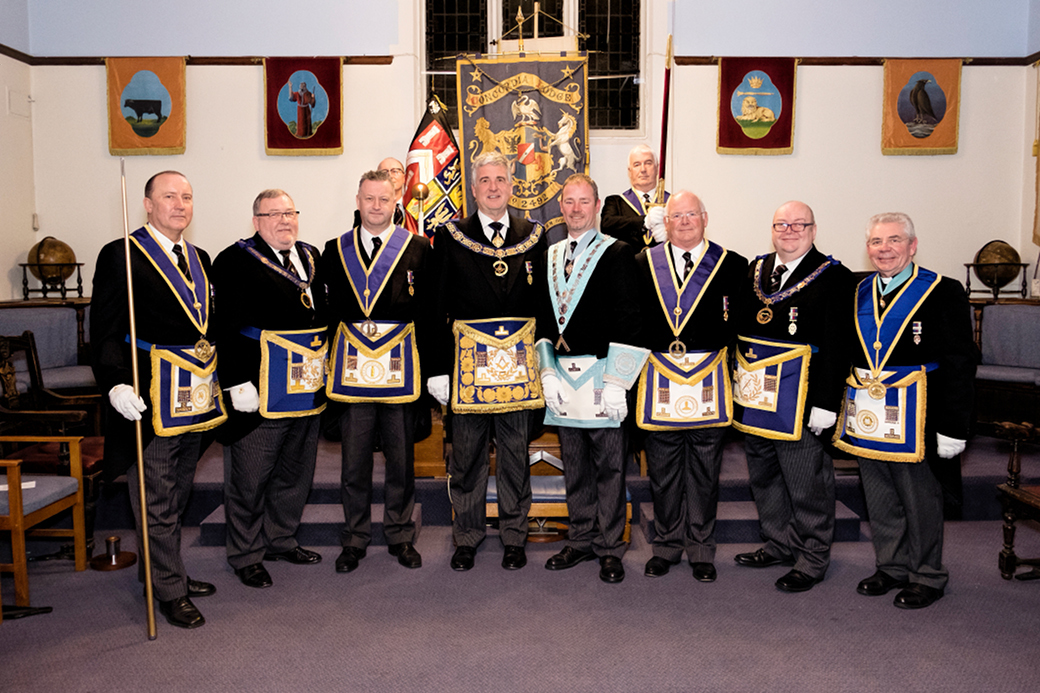 Senior members of the Provincial team with the WM of Concordia Lodge.