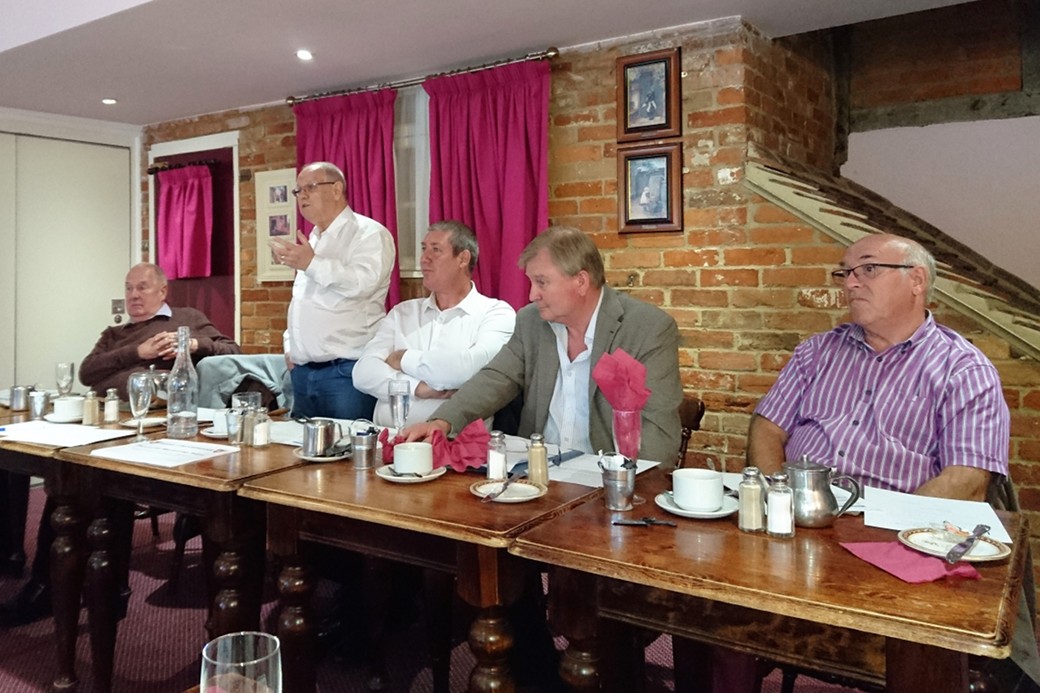 On Saturday the 21st May 2016 the first meeting of the Eliot Hall Saturday Morning Club took place at the Bell Hotel Winslow.

Conceived during the Mentoring Conference held in Aylesbury earlier this year, a number of brethren from different Lodges which meet at The Eliot Hall, Winslow, had the idea of a Saturday Morning Club to help newer brethren, Lodge Mentors and experienced masons to get together and discuss various aspect of Freemasonry.

Seventeen members from the Eliot Hall centre attended and enjoyed a sumptuous breakfast. A lively and interesting discussion then followed.
The event was opened by W. Bro. Paul French, the North Bucks Mentoring Coordinator. Paul presented the role of Mentoring in Bucks and then handed over to W. Bro. Caleb Walton. Caleb explained the purpose of the Club, which was to try and answer those questions brethren had about Masonry but never quite had the time to get answered.

The Club was to be driven on two fronts. Firstly, by working through the mentoring forms available on the Bucks Masonic website and, secondly, by demand from the Brethren who were in attendance. The mentoring forms could then be taken by delegates back to their own Lodge Mentors and used to help with their own Personal Development Plans. It was emphasised that the Club was not in competition with neither the NECC, nor the Provincial Mentoring initiative, but was there to add value to both.

One of the topics discussed was the layout and etiquette of the Festive Board. Thus the room had been set up as at a Festive Board, and two of the newer members took the seats of the Senior and Junior Wardens. It proved an easy way to demonstrate where people sat and what their roles were. Discussion ranged from basic etiquette to what is Masonic Fire? A true Masonic Mystery!

One other lively and interesting topic discussed was that of the Lodge Visiting Officer (VO). This session was led by W. Bro. Trevor Stubbings. Much interest was shown in the role and many questions ensued.

Feedback from the meeting was that it was worthwhile, it will continue and is to be recommended to others.

A wide range of topics was tabled for future discussion and the Club would like to welcome all who use The Eliot Hall to their next meeting which will be held on Saturday the 24th September and will look at the First Degree Ceremony and Regalia, (meeting at The Bell Hotel first for breakfast).