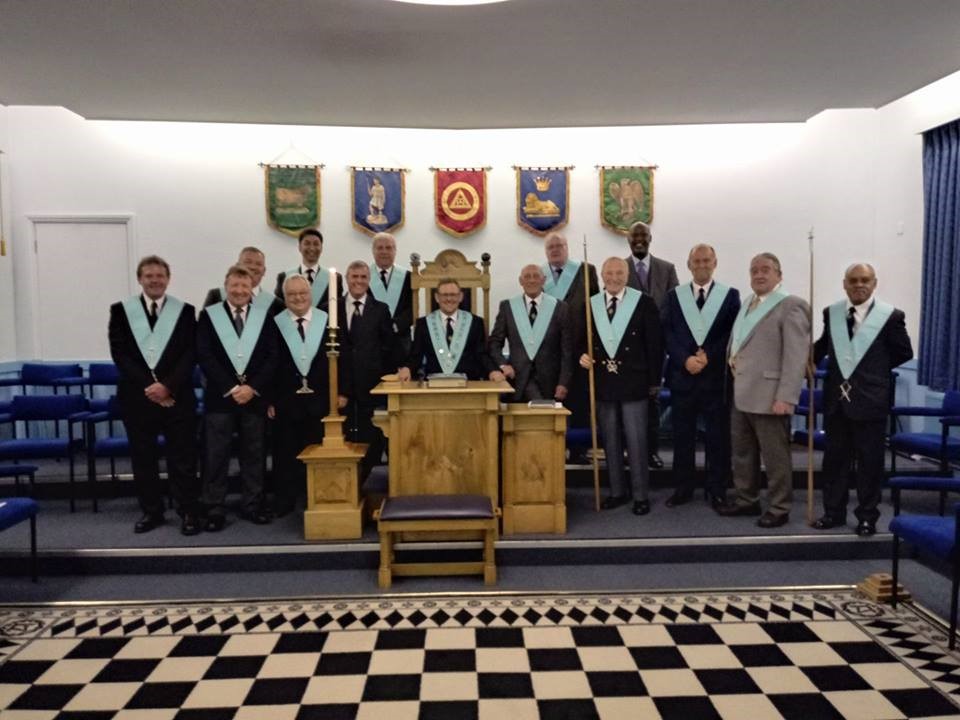 For those not familiar with the concept, Manor Class, founded in 1967, provides weekly masonic tuition to brethren residing in or near to Milton Keynes who, for such reasons as distance (perhaps working in London) or work commitments, are either unable to attend, or wish to supplement the learning at, their own Lodge of Instruction. Membership is really expensive – yes, the grand sum of £1.50. The Class assists in preparing these locally-based brethren for taking Office in their own lodges by regularly rehearsing the Craft ceremonies of Initiation, Passing, Raising and Installation which they perform in their own lodges.

On 30th June 2017, the preceptors and members, past and present, gathered in the Temple at Bletchley to celebrate 50 years of weekly classes. They were honoured by the presence of many worthy guests, including W.Bro Graham Dearing (AsstProvGM) and W.Bro Mick Hull (ProvGPurs), as well as others, such as W.Bro Mike Stimson (Past DepProvGM), W.Bro Phil Blacklaw (ProvGAlm), and W.Bro Steve Tunney (ProvSGD), who had all honed their ritual skills at Manor Class.

As part of the celebrations, members of Manor Class who had not yet been Installed into the Chair of King Solomon (and one who had recently been installed but had not yet performed any of the ceremonies in his own lodge), put on a demonstration of the First Degree ceremony. The ceremony was performed in an exemplary manner by Bro Kevin Lloyd-Davies (Fenny Stratford L8985), ably assisted by Bro Peter Finegan (Fenny Stratford) as SW, Bro David Talbot (Manor of Swanburn L8647) as JW, Bro Mark Dennaford (Magiovinium L8091) as SD, Bro Jagesh Buttoo (Bletchley Park L9518) as JD and Bro Derek Storey (St Martins L2812) as IG. Bro Alan Hollis (St Martins) acted as Candidate and Bro Nick Wyley (recently Initiated into Bletchley Park), gave a most impressive and flawless presentation of the First Degree Working Tools.

The work demonstrated was deemed by those present to be of the highest quality. The brethren taking part should be proud of their achievements and the preceptors, W.Bros Ken Rayment (Chairman), John Noakes (currently ProvGTyler), Jim Stafferton, Gareth Lloyd-Davies, Colin Milton, Lou Jacquest-Amey and Brian Sweet, of their tutelage.

The happiness of the event was tinged with a little sadness at the memory of the loss of long-serving Chairman, W.Bro Reg Brinklow, as well as former Secretary, W.Bro John Haiselden, who had been called to the Grand Lodge Above during the year, and W.Bro Bob Burt who had been called 3 years before. W.Bro Reg would have been looking down on proceedings with his usual great interest.

Unlike the Preceptors of the Emulation Lodge of Instruction in London who, at the same time were having their annual celebration and whose Secretary had sent congratulations, this event in Bletchley was free. An Alms collection in the Temple raised £92 and, at the delicious Festive Board which followed, a raffle in aid of the Buckinghamshire PGL 2021 Festival for the MCF raised a further £210. In the Temple, a motion to donate £100 to the Bletchley Masonic Hall Building Fund, as a thank you for the on-going use of the wonderful premises, was passed by the members.